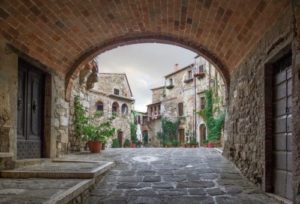 Montemerano is certainly one of the most fascinating places in the Maremma, a small maze of alleys and squares where you can still breathe today that atmosphere typical of ancient villages … artisan shops, shops of typical products, restaurants and wine bars, a walk through the walls of the historic center is an experience not to be missed, a unique opportunity to take a dip in the past! Montemerano is a village with a typically medieval structure and its peculiarity is immediately evident from the ancient palaces, the walls, its beautiful Chiesa di San Lorenzo and the Piazza del Castello, without any doubt one of the most magical places in this small and delightful Maremma village. Montemerano is a jewel to discover, it is only a few minutes’ drive from the Terme di Saturnia and the Cascate del Mulino and is ideal for spending a quiet afternoon walking through its narrow alleys and admiring hidden glimpses of a beauty that takes your breath away.

What to see in Montemerano

Every corner of the village of Montemerano tells an ancient story, its ancient palaces, its imposing church, the large wall up to the famous Piazza del Castello.

The areas surrounding the village of Montemerano were inhabited since the Neolithic and Bronze Age. The birth of the first housing nucleus dates back to the Etruscan-Roman period, when the town was known as Mons Marianus, probably derived from that of consul Mario who here, between 88 and 82 BC.C. was defeated by Lucius Cornelius Silla during the Civil War. The first certain information about the existence of Montemerano dates back only to 896, when emperor Anulf granted it as a gift to the Abbey of San Salvatore on Mount Amiata. The city of Montemerano remained under the control of the abbey for over a century, until the year 1000, when it was conquered by the Aldobrandeschi and soon became the object of interest and disputed with the cities of Orvieto and Siena. In 1203 Roger of Montemerano and other vassals of the Aldobrandeschi, in the name of Count Ildebrandino, swore allegiance to Orvieto. After the marriage of Gemma Aldobrandeschi and Ugolino da Baschi, Montemerano passed to the Basque family who ceded him, in 1382 to Siena. Under the Sienese government in Montemerano the castle was rebuilt and the walls were fortified, making the city one of the most important in the Albegna Valley. At the fall of the Sienese power Montemerano passed to the Florentines and became part of the Capitanate of Sovana, until its annexation to the Grand Duchy of Tuscany, passing from the Medici to the Lorraine, until the day of its annexation to the Kingdom of Italy.

How to get to Montemerano

Our farm is only 7.8km from the village of Montemerano, which is easily accessible by car in just 10 minutes. Proceed in a north-west direction for about 700 meters, then turn right onto the SP159, continue for 130mt then enter the SP10 and continue for 5.1km, then turn left and continue again for 1.9 km.

★★★★★
Read More
Montemerano is a truly charming village, unique in its kind. Reachable in just 10 minutes from the Baths of Saturnia, it is perfect for a relaxing walk through history... we had dinner in one of the great restaurants in the village and were pleasantly impressed with the quality of the dishes! A walk at night is a must!
★★★★★
Read More
Montemerano is one of those villages that captures you at first glance... already on arrival you see it imposing on the hill and you fall in love, when you then stroll through its alleys and let yourself be carried away in the past, visiting the beautiful Church of San Giorgio and the wonderful Square of Castle, you are even more fascinated by it! Definitely worth the visit...
★★★★★
Read More
We visited the beautiful village of Montemerano in April, and were ecstatic by its ancient beauty. Fantastic the Church of San Giorgio with its paintings from the 15th century...
★★★★★
Read More
We dedicated an afternoon to discovering this delightful village among the Tuscan necks and were fascinated by its simple beauty... the spa is only a few minutes away!
★★★★★
Read More
Montemerano is a truly wonderful village, small but full of attractions, every corner is a new discovery. The small shops of typical and artisan products are also characteristic. We had a really good time and also Montemerano is only a 5 minute drive from the Mill WaterFalls!
★★★★★
Read More
If you are in the area do not miss the opportunity to visit this delightful ancient village. Montemerano is in fact one of the most beautiful villages in Italy. Don't miss the Church of San Giorgio, the Suqre of Castle and the Walls...
Previous
Next